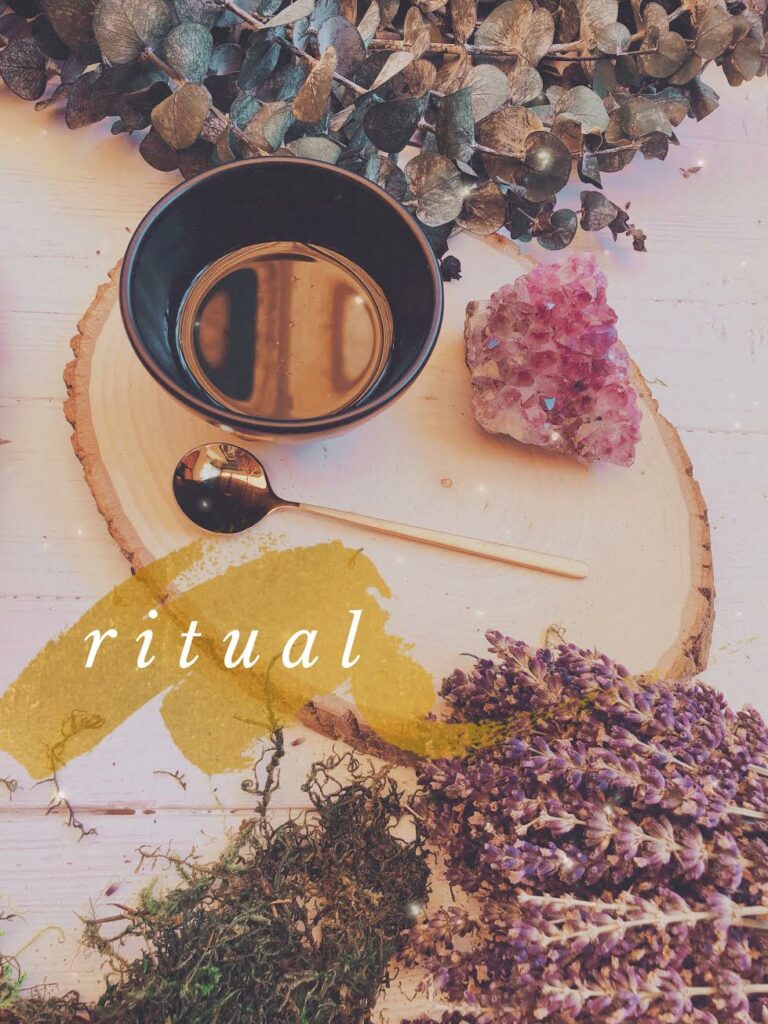 I am so pleased to finally announce my newest offering, ritual! Ritual is an in salon treatment. It features a combination of hot oil scalp massage, aromatherapy , and energy work. The reason it’s called an “intuitive” oil treatment may sound a little woo woo, but basically the oils choose you! That’s only a  part of what makes this service so unique.

The oils I use are a custom blend of 3 different carrier oils. I choose these based of your hair texture, type, and needs. Then I take a few drops of a few of the highest quality essential oils available each with physical as well as energetic properties to nourish scalp and soul. 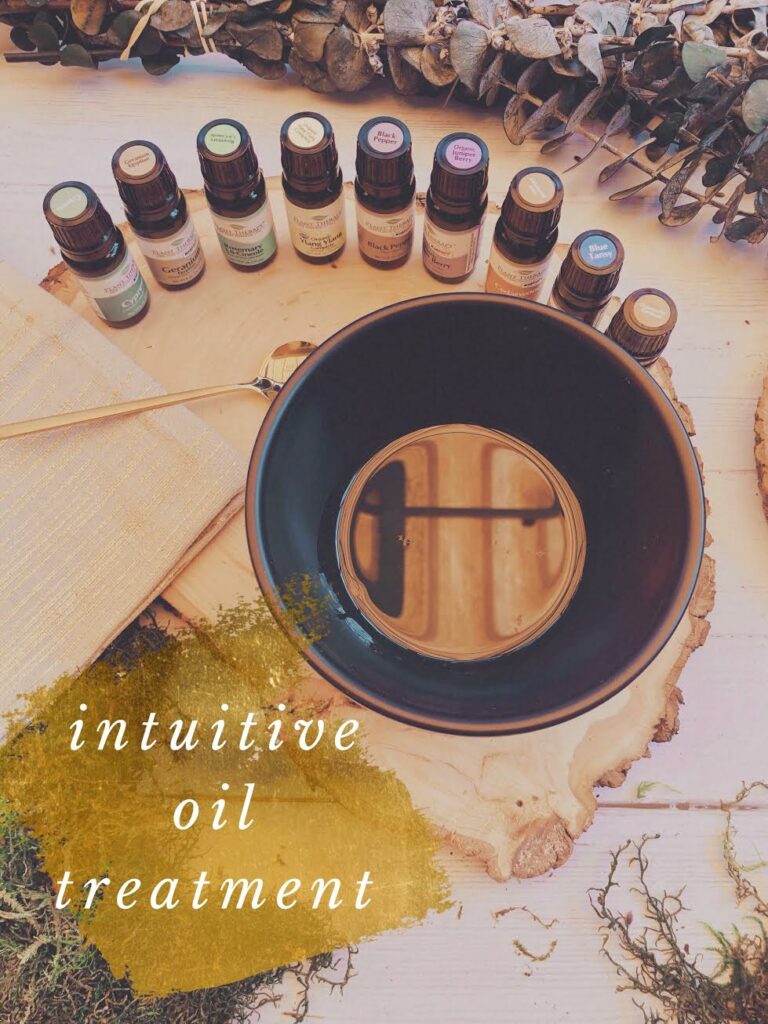 Part of the Reason I felt called to create Ritual was because I have noticed a lack in the hair care world when it comes to not only all natural treatments, but also indulgent pampering sessions. These days a facial comes with a gua sha massage, a pilates class comes with a cbd salve rubdown, with a massage you might get 30 minutes of dry brushing or a sound bath! Your head and the hair on it deserve just as much love and attention. It’s housing your busy brain after all. 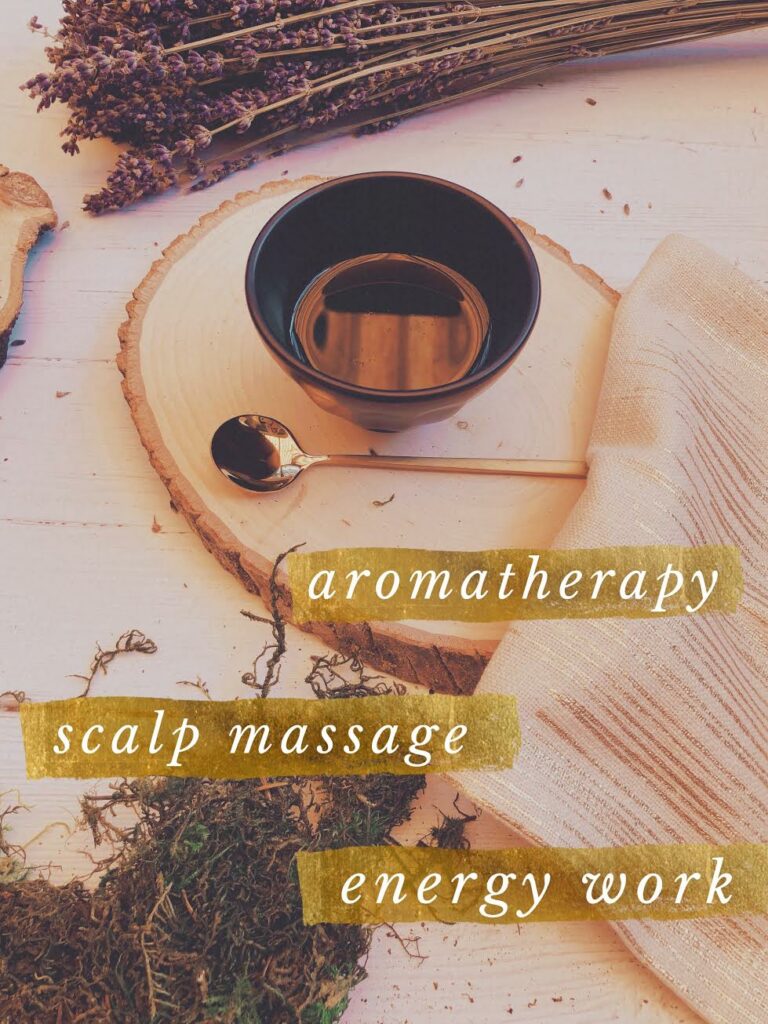 Ritual can be added on to any cut or blowout service or it can be a stand alone treatment if you want to stop by for a quick scalp rub down and then head out the door. If booked as a stand alone you will have a choice to either leave with the oils still in your hair or leave wet. The services on my menu as “ritual” and you can go ahead and book yours now! 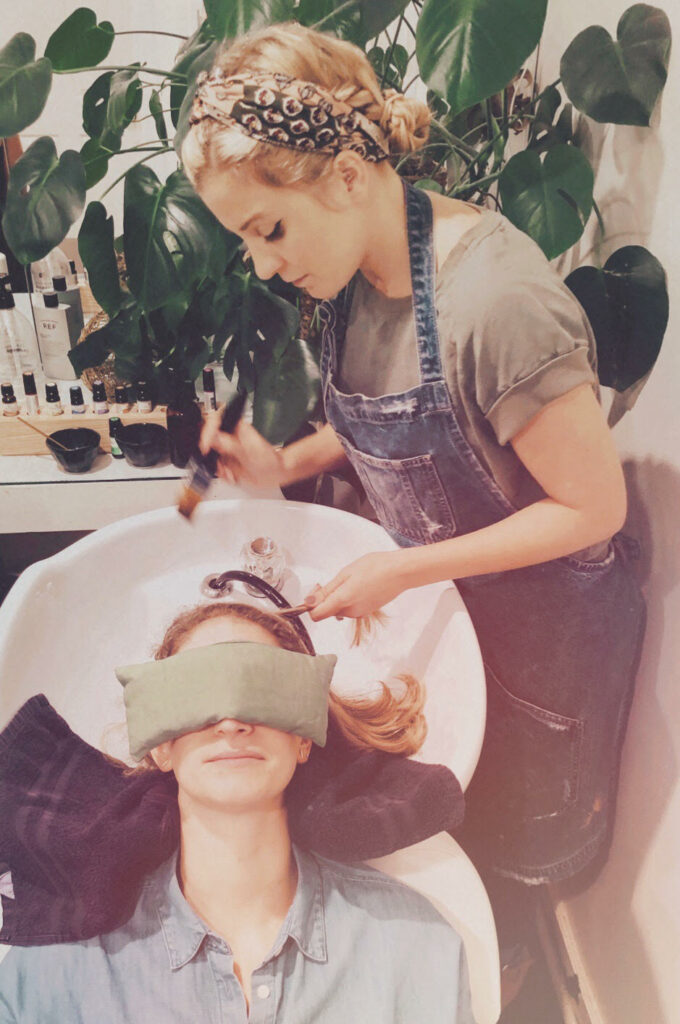 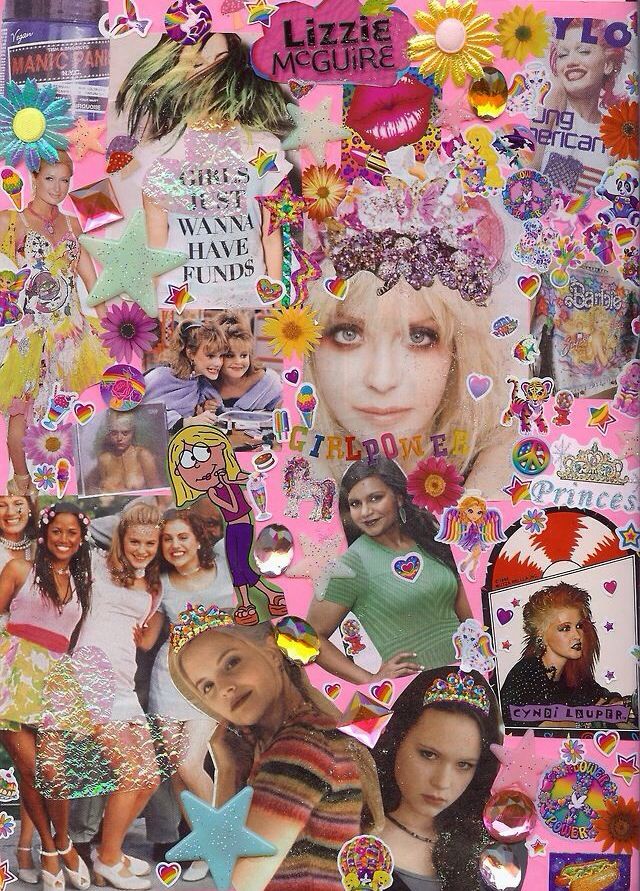 When I was twelve years old, and early onset puberty hit, it turned my hair, the silken honey-hued strands that were once my crowning jewel, into a waist-length, unmanageable, brown bail of hay. My hair was close to my waist at the time, further triangling out with each passing day in the Mississippi humidity. The boys took to calling me “poofy.” I’ve never been one to mind too much what others say so I can’t say I was very bothered by that. What I noticed was my two best friends at the time had managed to get through all of the sixth grade without so much as a darkening of their hair hue, let alone even hints of the other, not so subtle differences that puberty brings.

My mom, either in an effort to hold onto my youth or maybe to hold on to hers, had refused up to this point to let me cut my hair. So, of course, I did what any surly preteen girl would do. I waited until I was visiting my dad in Florida and had my stepmom take me to her hairstylist to cut my hair into a bob. Needless to say, my mom wasn’t thrilled, as a way of regaining control, she offered me highlights.

For some reason, she had decided the specific task of highlighting my hair couldn’t be left to any of the stylists from the Mississippi salons I had grown up going to. We had a referral for a salon in New Orleans. At the time, we already made bimonthly drives to shop there so it had been decided this is where we would go. We made the two-hour trek playing all the tunes from my mom’s three favorite artists, Sade, Sting, and Seal.

Busta’s was a beautiful, older space with large windows on Thcopitoulas St. in New Orleans. It was an eclectic mix of culture and, in pure New Orleans fashion, counter-culture. I had been to New York, and this felt very much like a salon you might see there. I’m sure some music like Radiohead or Morcheeba was softly playing. There were high-end artsy magazines like W and Nylon strewn about the tables. There were magazine cutouts pasted in collage fashion on the walls as inspiration. The stylists themselves were fascinating to me. I saw blondes, brunettes, redheads, bald heads, piercings, and tattoos. The clientele ranged from older sophisticated New Orleans socialites getting their carefully placed highlights to young hip artists getting their bleach and tone. I had never felt cooler.

The salon was specialized at the time. My mom left me in the hands of Caleb, a colorist, and Trent, a haircutter. We had a consultation and then they discussed what each was going to do to make sure they were on the same page with my decided look. Some subtle highlights and a reshaping of my bob would be the desired outcome. As Caleb placed the foils in my hair, I made what I now as a stylist know the be the most cringe-worthy joke about getting HBO with the reception from my tin foils. Caleb did not roll his eyes, and politely laughed instead. Trent trimmed my hair, and I will never forget after he round brushed me with his boar bristle brush running my hands through what could only be described as golden silk. These were miracle workers.

And so this would continue for years. Making the trip to New Orleans every 6-8 weeks to see these hairstylists. The salon name changed to Stardust and moved to Magazine st. But the stylists and the vibe remained the same. Each time I felt more stylish by being in their presence. I would listen quietly (which if you know me is quite a challenge) and absorb what I could about their lives, their culture, their humor. Being from a town in South Mississippi, I didn’t often get exposed to people whose lives weren’t much like my own. Caleb was so patient. Even the time in tenth grade when we called him for an emergency color correction because I let my friend Catherine dye my hair maroon with a box. I even brought Catherine with me to the appointment, and he was beyond polite as we peppered him with questions about his love life and what it was like to be a boy and date a boy.

Sometime within the next year or so, Caleb left a voicemail for me on my home phone. He thanked me for being such a great client and told me how much he had enjoyed getting to know me. Caleb was moving to San Francisco so he wouldn’t be able to do my hair anymore. That little voicemail, the fact that he had thought of me enough to call. It seems silly, but it meant the world to me at the time.

Years later, I was living in New Orleans and working as an apprentice at a different salon, but I would still pool my pennies together to go to Stardust and have my hair done. It was just as ever an eclectic New Orleans mix of customers and stylists. The work still impressed me even after having received my own hair education.

I’ve since moved to Austin, TX, and I’m not still making trips to New Orleans to get my hair done, but the magic of that experience has remained with time and nostalgia. About a year ago, I had a new client appear on my books. We got to chatting, and it turns out she was not only from New Orleans but also had grown up going to Stardust Salon/Busta’s for many years. We instantly bonded over our love for it. We laughed thinking about being two of their youngest clients getting highlights as thirteen-year-old girls. I’m not sure why, but for some reason, it solidified the reality of my experience being able to hear a similar tale told from someone else’s perspective.

I’m writing this today to impress upon the reader as well as myself the impact we can each have on other people. You never know who is watching or what they might be thinking. I won’t say going there is the sole reason I do hair today. That’s really an amalgam of this and many other stories that I’ll save for a different day. I will say that Stardust salon seemed like a cool place to work full of interesting people who were great at marrying artistry and customer service, which is probably why they are still in business today.

*please note all images are from google search. They are not my own and I am more than  happy to give proper credit if they are yours. 🙂